As with any marketing campaign, a variety of concepts were tossed around before the iconic artwork was settled upon. In 2011, three low-res photos of rejected poster art found their way online.[1][2] The first is a variation of the final version with the tagline All of Charley's worst nightmares just moved in next door. The second features Evil Ed and Amy cowering behind Charley in the silhouette of Jerry's monstrous hand. The third is a generic hand opening an ominous door bursting with light. 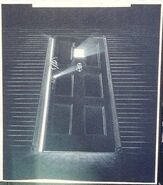 Posters Around the World[]

Worldwide, artwork by the B.D. Fox company adorned posters depicting a decrepit house with the face of a vampire looming in the clouds above it. The artist who rendered the painting is unknown.

In Japan, advertisements for the movie boasted the poster art along with cut-out stills from the film. Similarly, poster art from Pakistan, where the film was titled Night of Horror, also included altered artwork with cut-outs. Interestingly in this version, the skyline has been darkened to make the face in the clouds resemble an alien with a large cranium, and a monstrous right-hand (incorrectly) reaches out from the right side of the sky beside it. This is perhaps the most unique of all of Fright Night collectibles - as well as one of the most difficult pieces to obtain.

But unquestionably the single most unique theatrical poster hails from Ghana, Africa, and was hand-painted on a large flour bag. This poster, which hung outside the theatre in the village where it screened, features a variation of the face in the clouds looming above Peter Vincent, who's placing a cross on Evil Ed's forehead. The poster later wound up in the clutches of writer/director Tom Holland and can be seen below. 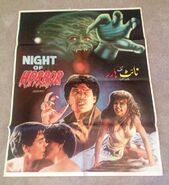 A variety of posters exist for special screenings, as well as posters created by various artists and fans. Some of them have been printed, others are in rampant digital circulation and have been used for custom DVD/Blu-Ray covers.

Columbia did the standard promotion campaign, with theatrical trailers and TV spots which played up the horror element of the film. The J. Geils Band filmed a music video for the title song, and the press was sent a reel of 7 clips from the film for use in reviews as well as longer 95 minute electronic press kit. Additionally, a lengthy clip from the climax of the film was featured in Now Comics' 1992 Comic Trade Show Marketing Video[3] to promote the comic book tie-in.

Columbia also put together an EPK (or Electronic Press Kit). Running nearly 95 minutes (with some redundant clips), included are a wealth of rarely seen behind-the-scenes footage and interviews. A copy of this was included on the 30th Anniversary Edition Blu-Ray, sourced from video and with a running time-code on screen.[4] It's split into the following chapters:[5] 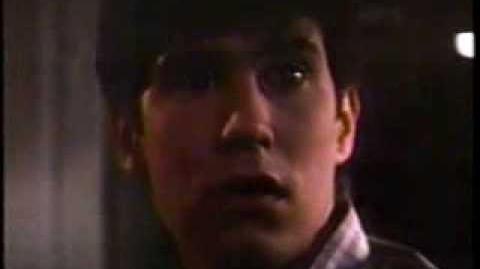 To promote both the release of the film and the soundtrack album, the J. Geils Band produced a music video for the title song which utilized many clips from the film and received minor airplay on MTV. It was the last music video that the popular '80s group released before they disbanded. The best quality version was included on the DVD collection "Spooky Videos, Volume 2,"[7] which was released by Promo Only, a company which caters exclusively to professional D.J.'s and V.J.'s. In 2015, the video surfaced in a lower-quality VHS duped format (which includes a running time code on the screen) as part of the EPK on the 30th anniversary edition blu-ray. Also included with this version is a short featurette chronicling the making of the music video.

Lobby cards are cardboard cards adorned with photographs from movies which were intended to be hung in the lobbies of theatres. Several variations of cards for Fright Night exist around the world.

Although many of the images were the same, the German lobby cards featured some more horrifying images than the American set. Two sets were released, each including a card with the poster art logo and German text, one which heralded the film by proclaiming, "There are some damn good reasons to fear the dark!" and the other promised, "If you love fear, this is your movie!"

In the pre-internet era when the film was made, filmmakers had to rely on print reporters to get the word out about their films. Because Fright Night landed the FX team responsible for the then-current hit GhostBusters, special attention was paid to the production by periodicals like Fangoria Magazine and Cinefex. Thanks to endless interest in the film, there continue to be occasional retrospectives and interviews published.

A press kit is a packet of promotional information which is distributed to various media outlets. The press kit for Fright Night came in a white folder adorned with the logo in bold red letters and included photographs, production information, a dissection of vampires and biographies of principal cast and crew members. The press picked from this information to promote the film, the result of which is duplicate material that was published in countless newspapers and magazines.

In Japan, a 24 page souvenir program was issued featuring color and black and white stills from the film and Japanese text. Although collectible, the programs are fairly common and generally sell for $5-$10.[8][9]

In Germany, a single-page program was issued featuring some black-and-white stills from the film. This is a little less common than the Japanese program - but also less desirable - so it sells in the same price range.

Fangoria magazine extensively covered the original film and included lesser coverage of the sequel and remakes.