Amy Peterson was the girlfriend of Charley Brewster.

Defiled by a vampire[]

She didn't believe Charley when he claimed that his neighbor, Jerry Dandrige, was a vampire. She learned her lesson the hard way when she was kidnapped by Jerry and turned into a vampire herself, and only her boyfriend could save her. Dandrige took a liking to Amy because of her resemblance to a portrait of his lost love. She was eventually saved when Charley and horror icon Peter Vincent destroyed Jerry Dandrige.

Charley and Amy ceased dating because he is so obsessed with his mysterious new neighbour that he sidelines Amy's decision to give herself to him and subsequently ignores her efforts to patch things up. She loves him however and is committed to try to help him until she gets seduced by Jerry.

There is a happy ending with Charley and Amy making up in his bedroom, but with a slight twist.

Amy is short-tempered, headstrong, anxious, feisty, shy, passionate, smart, respectful, and mature. Amy is know to get very upset whenever she is not being listened to especially by her boyfriend Charlie. She is also known to be very shy and speechless when it comes to sexual romance.

Charlie Brewster is Amy's ex-boyfriend. It was known in the second film that they broke up for an unknown reason. While Charlie and Amy were dating, Amy refused to have a sexual relationship with Charlie, mostly because she wasn't ready for one even though Charlie was. Charlie mostly rushed their relationship, but Amy wasn't in a hurry, Charlie would get upset whenever Amy denies to have sex with him. Amy is known to get upset at Charlie whenever he doesn't listen to her, at the beginning of the film Amy finally decided to make love with Charlie, however, Charlie was looking out his window after seeing two guys carrying a coffin into their basement. A serious Amy asked Charlie if he still wants to make love with her or not, but Charlie did not answer and Amy left his room upset. The second time was when Amy said goodnight to him just before leaving, Charlie didn't say goodnight to her back, but was still looking out the window not paying very much attention to her. When she said "See you tomorrow, Charlie?" Charlie was still not paying attention to her. Amy got upset and angrily slammed the door on her way out. Amy has been giving Charlie the silent treatment for a few days. Third time was when Amy decided to forgive Charlie, and went to see him at a restaurant much to Charlie's surprise. The two apologized and forgave each other. Just as the two were beginning to build back up their relationship again, Charlie started to watch something on the news about a woman that he saw yesterday was murdered while Amy was talking to him. Amy who has had enough of being ignored by her own boyfriend, she stole a guy's burger and threw it in Charlie's face breaking up with him, while Ed was laughing at him. After Charlie found out that his next door neighbor, Jerry Dandridge was a vampire, he tried to tell Amy, But Amy only believed that it was a trick to get her back. Charlie ignored her and went to tell the police instead, Amy tried to tell him that he couldn't go to police with a story like that but he didn't listen. Amy also tried to help Charlie after learning that he was planning to kill Jerry himself. Amy did not want him to attempt murder so she and Ed went to Peter Vincent for help. He is a washed-up actor who used to be the great vampire killer. Charlie also became jealous after seeing Amy's reaction when Jerry kissed her hand. Amy and Charlie were later being pursued by Jerry, the duo went into a dance club to hide in after being trapped by Jerry. Amy was beginning to get scared but Charlie promised that he wasn't going to let Jerry get her. Amy was soon being seduced by Jerry and Charlie demanded Jerry to let her go, and the two fought over her. As Charlie and Amy tried to escape, the two are separated by many panicking people. Jerry caught up with Amy and abducted her. That night, Charlie went to save Amy along with Peter. Charlie noticed that Amy had already been bitten by Jerry and has already began her transformation. Once Amy has became a vampire, she started ambushing and taunting Charlie after reminding him of his promise he made to her at the dance club. Then Amy changed her regular vampire form into one with a mouth full a sharp fangs and tried to kill Charlie, but Charlie hit her in the head with a glass vase, knocking her out. After killing Jerry, Amy has turned back into her human form, and she embraces Charlie and Peter. The couple are later seen back in Charlie's bedroom making love, but this time, they are taking their relationship slow. However, Charlie and Amy break up, and are no longer dating. It is still unknown why they broke up.

Jerry Dandridge was in love with a woman who looked like Amy a long time ago. He has a painting of her in his house. What became of the woman he loved long ago remains unknown. Jerry first saw Amy when Charley, Evil, Peter and her went to Jerry's house. When Jerry first saw Amy, he was stunned by how much she looked like his lost love. He stared down at her, kissed her hand and said "charmed" which caused Amy to blush. Later that night after hunting down Ed and turning him into a vampire, Jerry went to chase after Charlie and Amy. Jerry caught up to them and they tried to run away but Jerry kept on trapping them. The two had no choice but to go into a dance club. While Charlie called the police, Jerry found them but only wanted Amy. He seduced her by sexually dancing with her. However, Charlie demanded Jerry to let her go which he refused and kissed Amy. Two guards saw the fight over the young woman and took Charlie and Amy which caused Jerry to get angry and he killed the guards. Once Charlie and Amy where separated, Jerry caught up with Amy and hypnotizes her again. He quickly leaves the club with her. Hours later Amy awakens finding herself on a blanket in Jerry's home. She notices a painting of a woman who looks just like her. Jerry said to her "she's someone I knew, a long time ago". This time Jerry tries to seduce Amy by having sex with her, however, Amy is nervous so Jerry hypnotizes Amy again, and then Amy starts to kiss him back. Soon enough Jerry bites Amy and the scene turns black while blood is running down Amy's back. After Jerry bit and had sex with Amy, he patiently waits for Charlie and Peter to arrive. After his servant Billy Cole is killed, Jerry awakens Amy who has completed her transformation and demands her to help kill them by saying to her "show me how much you love me Amy, kill them...both". When Jerry is killed as his body is burned by sunlight, he calls out to her and she tries to get up to help him only to be stopped by Charlie.

Amy has a love/hate relationship with Ed, however, just like Charlie, she is often annoyed by his foolish behavior. 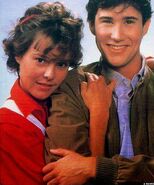 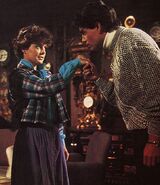 Amy looks around the dance floor

Amy in her vampire form 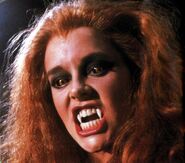 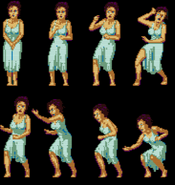