Start a Wiki
Amy Peterson is the girlfriend of Charley Brewster. She was turned into a vampire briefly after being kidnapped by Jerry Dandrige.

In the remake, Amy is played by British actress Imogen Poots. Amy Peterson is the girlfriend of Charley Brewster, she is also the love interest of Jerry Dandridge. 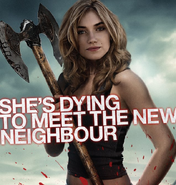 From the movie poster

Amy As a Vampirehttp://www.dvdactive.com/images/reviews/screenshot/2011/12/ogvcu0pr003zdk4yc7gf.jpg
Add a photo to this gallery

Charlie Brewster Charlie is Amy's boyfriend. Charlie tries really hard to act cool for Amy so he doesn't lose her. Charlie ditched his best friend Ed for her which is why Ed hates Amy but at the hospital when his mother pass out after being chased by Jerry, she admitted that she loves Charlie because he's different from Mark and Ben. Charlie tried to ask Amy to go to the prom at the beginning of the film but she said "no one goes to the prom on senior year" Charlie then tried to deny it by saying "right, I knew that". In another scene after Charlie had a little talk with Jerry, Charlie said he was tired Amy said she could fix that and offered him to have sex with her, Charlie and Amy kissed as they were getting ready but Charlie heard a doorbell sound coming from next-door and denied the kiss to go see who it was which annoyed Amy that he was not listening to her, Amy got upset at Charlie and went home. The next scene was Charlie was trying to explain to his mother and his girlfriend that Jerry was a vampire but they didn't believe him until he set the house on fire and killed a man after a car accident they had. After Jan staked Jerry in the chest with a sign she passed out in fear and the two took her to the hospital. Charlie & Amy went to see Peter Vincent the great vampire killer in horror films. When Mr. Vincent invites Ed to come deliver his package Ed has now become a vampire and has come to get revenge on Charlie, Mr. Vincent distracts him by pointing a small stake at him threating to stab him with it if he came any closer but Ed claimed that he has to get close enough to use it as Ed licked his lips wanting to feed on Peter. But Peter went into a room screaming Ed tried to chase him but the door closed on his arm. Charlie and Amy were trying to find a way to get out house but at the door they spotted Peter's girlfriend dead that was killed by Ed when he first came in, Amy was starting to get scared but Charlie calmed her down telling her that there is another door that can help them escape Amy went to go search for it while Charlie tries to stop Ed. After Ed dies the two escape but were still being pursued by Jerry. Charlie and Amy run into a dance club to hide however, Jerry catches up with them, Charlie and his girlfriend are separated by being pushed by too many people, Amy becomes scared as Charlie tries to look for her. Jerry finds Amy and takes her to the back of the club, Charlie tries to convince to the guard that Jerry is going to kill his girlfriend but doesn't believe him. Charlie fights the guard as he tries to get to her but was too late, Jerry kisses then bites Amy.

Retrieved from "https://frightnight.fandom.com/wiki/Amy_Peterson_(remake)?oldid=10722"
Community content is available under CC-BY-SA unless otherwise noted.