Cheryl Lane was a prostitute who was murdered by Jerry Dandrige.

Charley Brewster spotted the hooker while walking home from school. He was delighted to see such a bodacious woman in a lewd outfit strutting down his street. After observing her buttocks, he took note that she was entering the mysterious Dandrige residence. Later, Charley hears a bloodcurdling scream coming from the Dandridge house.

The following day, Charley sees a news report with her photo which reveals that the "known prostitute" had been found dead.

Charley staring at her buttocks
Add a photo to this gallery 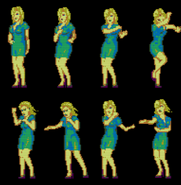 Retrieved from "https://frightnight.fandom.com/wiki/Cheryl_Lane?oldid=11425"
Community content is available under CC-BY-SA unless otherwise noted.