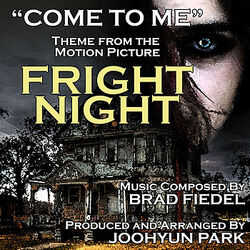 Come to Me is a song by Brad Fiedel which was utilized as the vampire seduction theme throughout Fright Night and Fright Night Part 2. The memorable song is a favorite amongst fans and numerous covers have been recorded.

In addition to the instrumental variations, the soundtrack album includes a rendition with words crooned by composer Brad Fiedel. An alternate version performed by Deborah Holland which includes additional lyrics was featured during the end credits of Fright Night Part 2, but this version has never been commercially released.

There are numerous covers of the song available on You Tube in a vast array of musical styles. Artists who've released renditions include but are not limited to Joe Stone, The Stranger Side (whom released two drastically different versions in 2011 and 2014), CLX, Janna Vang, Loren Montanez, Mia Evans, Ryan Bellegrave, LuckyLolita223, and kabup2. Some of the more notable releases:

Words and music by Brad Fiedel

Your life is the same, day after day
Everything that you do, you do the same old way
I can show you the world in a different light
Keep your heart to yourself, give your soul to the night

Additional Verse (from Fright Night Part 2)
You can wait your whole life for the sun to rise
When it finally comes up, it's gonna hurt your eyes
I can show you the world in a different light
Keep your heart to yourself, give your soul to the night

The instrumental version of the song.

Variation from the scene in which Charley catches Jerry about to bite his latest victim.

Joohyun Park's instrumental arrangement, released both as a digital single and on the album Halloween Horror Hits, Vol. 1.

The Stranger Side Edit

In 2011, a rock rendition was recorded by The Stranger Side.

In 2014, The Stranger Side released a slow, breathy rock rendition featuring additional vocals by Ardra Neala.

Featuring soundbytes from the movie and vocals by Dana Jean Phoenix, Perturbator's cover was issued on an indie compilation titled The 80's Dream Compilation Tape - Vol. 2. by NewRetroWave.[2]

Joe Stone played piano and performed vocals on his video.

CLX released a strange thumping hip-hop/rap version in 2013. With additional (and often indecipherable) lyrics, this is unquestionably one of the most unique renditions of the song.

Following a minute-long introduction, Mia Evans soulfully crooned the song a cappella for her webcam.

In 2012, Ryan Bellegrave growled his way through a Gothic rendition.

Loren Montanez applied makeup and contacts for his 2013 webcam performance of the song. He is a Counter Tenor who uses Head voice/Falsetto to sing. It is truly enchanting how he transforms his voice to this cover!

LuckyLolita223 used Brad Fiedel's instrumental as her backing track for a 2012 recording.

In 2012, Colonna Sonora recorded a rendition to promote the independent short film Fright of the Dead , which utilized three songs from the movie's soundtrack album. The video includes a montage of photos from the zombie short.

Kabup2's whimsical video features a solarized visual of a man playing the guitar riffs for the song as his wife wanders around the apartment and plays with their pet cat.

Kristina Lakey gives an operatic performance accompanied by Dan Gerics on the keyboard.

Retrieved from "https://frightnight.fandom.com/wiki/Come_to_Me?oldid=11266"
Community content is available under CC-BY-SA unless otherwise noted.