Distinctive Dummies is a small company which releases action figures based on popular movie characters which have been overlooked by the mainstream toymakers. Many of their figures are not officially licensed but they are hand-made with great care, intricately detailed and sold exclusively in limited editions which tend to sell out in days. In July 2015 they issued figures of Jerry Dandrige and Charley Brewster, and have announced plans to release additional figures of Evil Ed, Amy Peterson and Peter Vincent.

The first figure released was an 8" Jerry Dandrige. Sculpted by Gab Facchinei with card art by Ron Gearing (featuring the common misspelling "Dandridge"), this figure was priced at $79.99[1] and was limited to 60 pieces which quickly sold out.

Citing a lack of interest,[2] the Charley Brewster figure was not issued as a stand-alone but rather in a two-pack with Jerry Dandrige. They underestimated interest, as the set sold out in 3 days.[3] Sculpted by Gab Facchinei with card art by Ron Gearing this was the first twin-pack the company released, it was limited to 50 pieces and sold for $149.99.[4] Again Jerry's last name was misspelled. 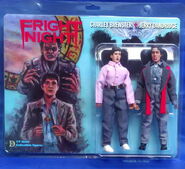 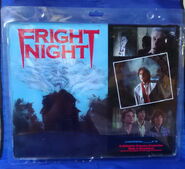 Add a photo to this gallery
<

Retrieved from "https://frightnight.fandom.com/wiki/Distinctive_Dummies?oldid=10484"
Community content is available under CC-BY-SA unless otherwise noted.