The original Fright Night has had countless home video releases around the world in various formats.

The original American VHS/Beta releases by RCA-Columbia Home Video for video rental in 1986 featured a pan-and-scan version of the film. These tapes were packaged identically in a cardboard cover which was adorned with the poster artwork; the back cover included a description and three photos; and the box sealed closed with a flap on the side. In addition to the obligatory "Now Available" home video posters, video retailers were also offered a large cardboard standee to promote the film, as well as a small countertop display which was tri-fold and included the poster artwork for the "Frankenstein" adaptation "The Bride" starring Sting and Jennifer Beals, with the third side proclaiming "Two new frightening entertaining films now available on videocassette."[1] Unlike the tapes themselves, the cardboard standees fetch high prices on online auction sites.

This release was subsequently followed by a bargain copy in the 1990s which sported a photo of Evil Ed on the front cover and frequently popped up on store shelves around Halloween.

The back cover of foreign editions include the synopsis inside a close-up of the mouth from the front cover's poster art - identical art was utilized for the back of the Fright Night Video Game.

Due to the then-wide availability and now-undesirability of video formats, videotapes of Fright Night are fairly common around the world and can be cheaply obtained. 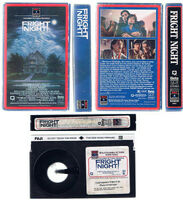 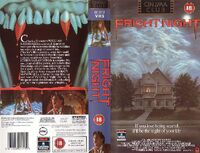 The movie was released on laserdisc in the USA, Japan and Germany. The original laserdisc releases are pan-and-scan, but the 1994 American LD included a letterboxed version of the film. The Japanese version was issued with an obi-strip which promoted other LD releases, and the German edition was pressed on a gold laserdisc. 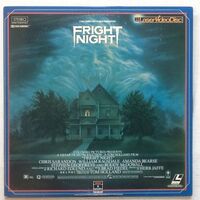 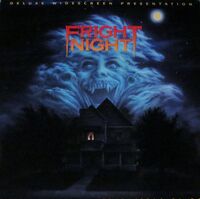 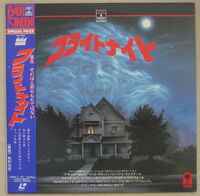 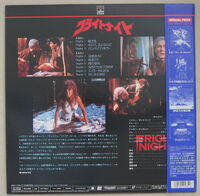 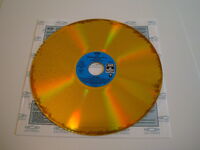 A lesser-known format today is RCA's Selectavision CED. Essentially a CED was a vinyl record housed in a hard floppy-disc casing which slid into a movie player. CEDs tended to be more affordably priced than VHS, Beta and laserdisc but they were prone to deterioration similar to LPs which made them less desirable, leading RCA to cease producing the discs soon after Fright Night was released.

Due to the large (record album) size, these discs are a desirable and affordable piece of memorabilia to bring to cast autograph signings - they generally sell in the $10-$20 range, though sellers have a knack for pricing them higher. Fans should note, however, that the paper covers were cheaply glued to the plastic CED housing, making them apt to endure wrinkling, creasing and air bubbles during production, and over time glue deterioration has a tendency to make the flaws appear more prominent. 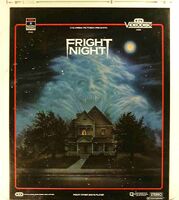 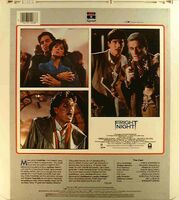 The film was issued by Columbia/TriStar Home Video on DVD in the USA in 1999. This release included a double-sided DVD which featured the widescreen version of the film on one side, a pan and scan version on the other, and the theatrical trailer on both. Included was a pamphlet with the poster art, five photos, scene selections, and a brief text interview with visual effects art director John Bruno.

The DVD was later issued by Sony Pictures Home Entertainment; this release is missing the pamphlet, bears a different company logo and a single-sided disc with the widescreen version of the film.

In 2008, the film was paired on DVD with Urband Legend, and in 2013, it was issued again as part of the "4 Movie Thrills & Chills Collection, Volume 3" along with The Craft, Monster High, and Brainscan. This release is unusual in that it includes new artwork.

Foreign editions are virtually identical to the standard American DVD, both in packaging and content. 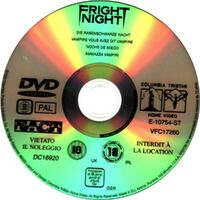 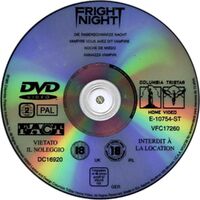 On December 13, 2011, the film was issued on Blu-ray in the USA in an edition limited to 3000 copies. This release includes two theatrical trailers, an isolated music score, and a four page booklet containing an essay on the film as special features. The disc sold out quickly and has become an expensive item on Amazon.com, generally priced in the triple-digits.

In 2014, it was released again in Japan and Germany, both boasting the theatrical trailer as the sole extra. The German disc is region-free, can be played worldwide, and is alleged to have a sharper picture than the American transfer. 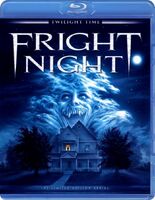 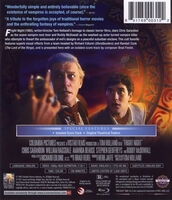 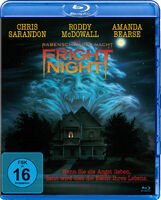 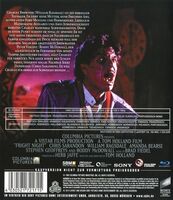 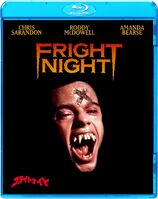 Twilight Time reissued the film in January 2015 as a 30th anniversary edition limited to 5,000 copies. This disc includes a wealth of extras, many of which have previously been freely available online, including:

The disc went up for pre-order on December 30, 2014 at Screen Archives for $29.95 with a per-customer limit[3] and at TCM for $34.95 with no limit denoted.[4] There were initial reports that the Screen Archives server crashed due to high traffic, and they announced they were sold out on January 1, 2015;[5] TCM's product listing was removed on January 2,[6] at which point numerous copies were listed on eBay for as much as $300[7] - though the starting price of that particular auction was increased to $1,000 the next day.[8] Prices for the disc soon plummeted to an average of $75.

Creator Tom Holland acquired 230 copies of the blu-ray and began selling autographed copies on his Terror Time website in April 2015. Three different packages were made available: a copy signed by Holland ($99.99),[9] one featuring signatures of Holland and five cast members ($149.99),[10] and a "Ultimate Collector's Set" which also included two group photos autographed by the cast ($199.99).[11]

In 2017, UK distributor released the film in a dual-disc DVD/Blu-Ray edition which is region-free and will play worldwide. Although many of the Twilight Time special features were absent, this edition boasts a truncated version of You're So Cool, Brewster! The Story of Fright Night (which is missing the main portion about Fright Night Part 2) as well as a few extras from the documentary's release.