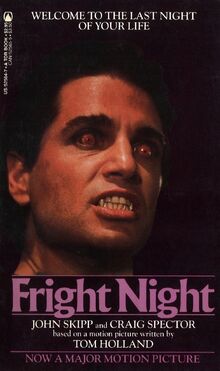 Fright Night is a novelization of the movie of the same name.

In preparation for the release of the film, author-partners John Skipp and Craig Spector had a one month deadline to compose a novel based on Tom Holland's screenplay. Exacerbating the time crunch, Skipp later revealed that Spector was still green, so he was forced to do heavy rewrites on Spector's pages.[1] Clearly the writers were given a vague idea of the cast (Roddy McDowall is cited as one of Peter Vincent's close friends) but the authors were not privy to the film itself, as Jerry Dandrige is depicted as a more monstrous character. The book includes various other deviations, additional dialogue and one-liners.

Generally speaking, the book follows the film scene-for-scene, but the authors frequently delved into the minds of the characters for further exposition -- though this was often as frivolous as Charley's inner-monologue while he struggles to unfasten Amy's bra.

The greatest deviations from the movie center around the Evil Ed character. In the novel, Ed was born to Norman Rockwell-esque Midwestern parents who couldn't understand why their son was so awkward and obsessed with horror movies. "Eddie" and "Chucko" (Charley Brewster) had been best friends since childhood, but the recent intrusion of Amy Peterson into their friendship had caused a rift. When Charley visits Ed for advice on vampires, he doesn't get information on crosses, stakes and garlic -- Evil Ed outright tells him to get lost. Later, in one of the few scenes exclusive to the book, Amy swallows her pride and phones Ed to enlist his help, fearing Charley's gone insane.

The scene in which Jerry drinks the holy water is also drastically different from what appears in the film and the script:

"Dandrige doubled over suddenly, breath rasping in horrible dry heaves. Amy, Peter and Ed rushed forward. Charley reared up triumphantly brandishing the cross. Before he could speak, a large hand grabbed his and squeezed, snapping the cheap crucifix in two. He turned to face Billy, who was smiling and shaking his head.

"And above it all, laughter. Dandrige straightened, laughing heartily. Shock, relief and confusion flooded his guests. Billy laughed, clapping Charley on the back. The whole room resounded with the revelry of the prank. All save one.

"That, too, is what a vampire's supposed to do, isn't it, Charley?" Jerry said."

In the United States, the book was released by Tor Books with a photo cover of a monstrous Jerry Dandrige (as portrayed by Chris Sarandon, in a scene shot at the club). In Germany, it was published by Goldmann, and the cover features artwork of a pale blue face with blank yellow eyes. Star Books published it for distribution in Australia, Canada, New Zealand and the United Kingdom, and this version utilizes the movie's oft-used poster art.

A hardcover version was issued in Germany, but elsewhere the book was only released in paperback printed on cheap, acidic paper stock, which has a tendency to yellow and become brittle with age. Pricing varies and fluctuates as wildly as 99¢ (a regular starting price for eBay auctions) up into the triple digits. Many resellers list it as "buy it now" for $25[2][3]-$75, but occasionally the books are listed for $10, and patient eBayers who wait for auctions frequently obtain copies for less than that. The Tor edition is most commonly found, the Star edition frequently surfaces on eBay in the UK and Canada; the Goldmann edition seldom surfaces on eBay but can be found on marketplace sites like Abe Books.

Retrieved from "https://frightnight.fandom.com/wiki/Fright_Night_(novelization)?oldid=11309"
Community content is available under CC-BY-SA unless otherwise noted.