Fright Night 2 New Blood is a remake of the 1985 film with some elements from the second film as well. By day Gerri Dandridge is a sexy professor, but by night she transforms into a real-life vampire with an unquenchable thirst for human blood. So when a group of high school students travel abroad to study in Romania, they find themselves ensnared in Gerri's chilling web of lust and terror. Charley and "Evil" Ed  must stop Gerri from drinking and bathing in the blood of a "new moon virgin," which just so happens to be Charley's ex-girlfriend, Amy.They enlist help from Peter Vincent, the vampire hunting host of a reality show called "Fright Night," to drive a stake through Gerri's plan and save Amy from a fate far worse than death.

Charley Brewster, Ed Bates and Amy Peterson are with their class as exchange students in Romania, with Charley trying to reconcile his relationship with Amy as she suspects him of cheating. On their first night in the hotel, Charley spots a woman biting another woman in the residence across the road. That woman is revealed later that night to be Gerri Dandridge, their college professor who is to be teaching them about Romanian History and culture.

While on a tour around the castles, Charley and Ed break away from the group and Charley notices Gerri seducing one of the other students. Later on, that student is revealed to be missing. That night, Ed decides to sneak off while Charley spots Gerri dumping a body. As she drives off to dump said body, Charley enters her home and finds a ritualistic sacrificial chamber. Gerri returns with a prostitute who she proceeds to drain of her blood which she then bathes in, restoring her youthful appearance. Once this ritual is complete, she spots Charley who is hiding in a coffin, but he manages to escape.

He tries calling the police, but they hang up on him, suspecting a prank so he goes to Amy who does not believe him either. The next morning, he reveals to Ed the vampire problem and Ed identifies Gerri as Elisabeth Bathory, one of the most powerful vampires. The two decide to go find Peter Vincent, the host of a paranormal investigation show called Fright Night, and they eventually find him at a strip-club where he agrees to sort out their problem for a fee. They leave the strip-club and go to a train-station where Amy joins them. They then go on a train only to find Gerri waiting for them. Peter runs off, leaving the three to try and face her on their own. Ed sacrifices himself so Charley and Amy can escape into the catacombs below. Gerri turns Ed then gives chase, but Charley and Amy manage to escape to the surface, but they are attacked again while trying to take a taxi to the airport and Amy is taken.

It is revealed that Gerri must bathe in the blood of a 'New-Moon Virgin' in order to be able to with-stand sunlight in her vampiric state, but in order for the ritual to be complete, Amy must kill Charley. While Amy is taken, Peter goes back to the strip-club and is attacked by Ed, who feels cheated because Peter Vincent showed no care towards his show which Ed watched religiously, but Ed is defeated by a crucifix Peter has tatooed on his torso.

Ed flees while Peter is then approached by Charley who he arms with stakes, holy-water and garlic before sending him to kill Gerri before the sun rises so Amy can be saved. When entering the castle, Charley is attacked by Ed, but manages to force him to ingest the holy-water, causing his torso to explode.

After that, he is grabbed by Gerri and forced into a massive bathing-pit where Amy awaits him. She bites Charley, turning him, but before she can kill him and complete Gerri's ritual, Charley stakes himself, incapacitating Amy. He does not stake his heart however and eventually his wound heals. Peter arrives and stakes Gerri, but Charley and Amy do not change back. Gerri reveals that Peter missed while changing to her final-form and pursues Peter. Charley, in his vampiric form, emits a high-powered screech that shatters all of the windows, allowing sunlight to enter the room and kill Gerri.

Fox greenlit the movie and rushed at a breakneck pace to get it completed. The first draft of the screenplay was written in a week and then it endured two months of revisions. Although producers of the 2011 film returned, the decision was made that the story would not follow the events of the previous films. "I thought it was a little bit of a play on the “James Bond” movies, where it’s always James Bond, no matter who plays him," commented director Eduardo Rodriguez.[1]

Jaime Murray is not a fan of horror movies and had never seen the previous films when she was given the script. " I read about ten pages and I didn’t really know whether it was meant to be funny or frightening. So I sat down and I watched Fright Night with Colin Farrell, and then I went back and I re-read the script. It was great because it gave me a point of reference, and it made me realize that even though it was really scary and dark in places, it was also funny."[2]

Will Payne made the conscious choice not to pattern his performance after previous Charley Brewsters William Ragsdale or Anton Yelchin. "This is a whole new cast so why not try and make this my own character, my own creation?" he asked.[3]

Filming took place over 30 days from November-December 2012 in Romania[4][5] [3] Temperatures frequently lingered around -15 degrees below Fahrenheit,[5] [6] which caused a variety of problems. Cast and crew members shook and shivered the whole time;[6] cameras ceased to operate as the weather froze them;[6] the gas station explosion had to be filmed in a studio due to fire safety concerns;[6] and during a pivotal sequence in a swimming pool, actresses Sacha Parkinson and Jaime Murray were so cold that the filmmakers halted production. "I just wanted to finish the scene but they said they had to stop it because I was going into hypothermia," said Murray.[7] "My mouth was chattering so much that they could see it on camera and I was like, Can we just have one more take?, and they were like, No. You've got to get out the bath!"

The film was released on DVD, Blu-Ray and Digital HD on October 1, 2013 in both R-Rated and Unrated editions. The rated version runs 31 seconds shorter, with 5 cuts of explicit gore and nudity from the scene in which Gerri lures a local woman into her lair.[8]

The movie's cover art was chosen by readers of Bloody Disgusting, a popular horror blog, which held a poll to discern which of three pieces of key art would be the best received.[9] The first cover won by a landslide.

To promote the release, the trailer premiered at the 2013 San Diego Comic Con where star Jaime Murray answered questions and Fox gave away flash-drive keychains in the shape of a cross. 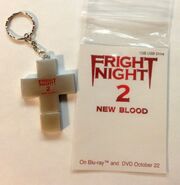 As DreamWorks had done with the previous film, Fox created a set of E-Cards to promote the DVD/Blu-Ray release. These cards featured images which were not included in the standard press photo package.

Retrieved from "https://frightnight.fandom.com/wiki/Fright_Night_2:_New_Blood?oldid=6911"
Community content is available under CC-BY-SA unless otherwise noted.