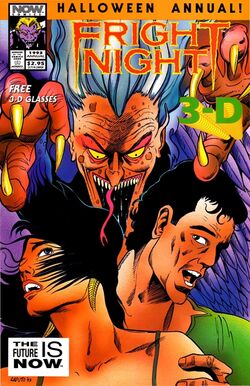 Fright Night 3-D Halloween Annual, aka Nightmares, is a comic book published in 1993 by NOW Comics, which was originally intended to be published in 2-D as issue #23 of the original series.

When evil sorceress Jessamyn Beuregard conjures a flock of demonic harpies, it's up to the Anti-Monster Society to save the day.

Retrieved from "https://frightnight.fandom.com/wiki/Fright_Night_3-D_Halloween_Annual?oldid=8032"
Community content is available under CC-BY-SA unless otherwise noted.