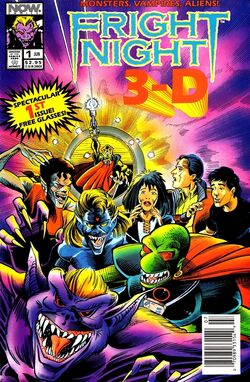 Fright Night 3-D is a 3D reprint of the comic books Psychedelic Death Parts 1 and 2 published in 1992 by NOW Comics.

As Peter's lost movie Psychedelic Death plays on TV, aliens plot their invasions of earth, so it's up to Derek the bartender to spread the news and Evil Ed to save the world.

Retrieved from "https://frightnight.fandom.com/wiki/Fright_Night_3-D_Special?oldid=7917"
Community content is available under CC-BY-SA unless otherwise noted.