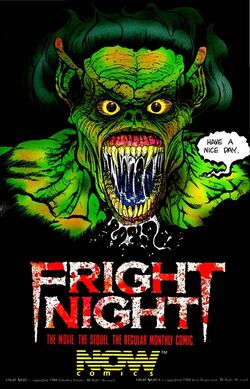 Fright Night Comics were originally issued by NOW Comics, a small publisher which licensed a variety of titles based on popular movies and TV shows and released 22 monthly Fright Night issues as well as a stand-alone adaptation of Fright Night Part 2 and four special 3-D issues.

In 2018, Tom Holland's Terror Time began production of The Peter Vincent Chronicles, a new series that picked up right where the original film left off.

Following a 2-issue adaptation of the first film, the series then evolved into original stories featuring the further adventures of Peter Vincent and Charley Brewster. In addition to dealing with the resurrected Evil Ed, Jerry Dandrige and other vampires, the duo also squared off against a squid-man, spider-boy, aliens, a minotaur and various other monsters. Many stories were spread across two-issues and there were running plots throughout the series. After the second issue, Amy vanished without explanation and was later replaced by Natalia Hinnault, Charley's girlfriend who had her own ties to the vampire underworld. Natalia's eccentric Aunt Claudia, whom possessed supernatural abilities, was later introduced and, along with hapless bartender Derek Jones, who was a magnet for unworldly beings, they soon formed The Anti-Monster Society to deal with the influential vampire coven The Legion of the Endless Night, as well as numerous other baddies.

Many characters were featured, both unique to the comics and derived from the films, but this list is of heavies who appeared in multiple issues.

Although they hired extraordinarily creative people and put out high-quality comics, NOW Comics was renowned for suffering various behind-the-scenes difficulties. Doubtlessly some of their financial troubles stemmed from the fact that NOW's comics were digitally scanned and printed on high quality paper at a time when it was just coming into vogue and some of their contemporaries were still utilizing traditional newspaper printing press processes.

Crew members working on Fright Night came and went as quickly as the inhabitants of Oz. Artist Lenin Delsol penciled the adaptations of both films as well as a few other issues, but the continuously multitasking staff found themselves doing a variety of projects, so he eventually left the book to focus his attention on other works. Artist Neil Vokes is a vampire aficionado whom specifically asked to work on the Fright Night series, but he became frustrated by the lack of a regular paycheck and quit. Pop-culture historian James Van Hise wrote the first batch of original stories, but he was taken off the book to focus on The Real Ghostbusters and The Green Hornet. At this point, Tony Caputo, the head of the company, stepped in to pen several issues and give the book a more comedic tone. Aside from Caputo, the only staff member to stick with the book from 1988-1990 was Katherine Llewellyn, head editor at NOW, who worked in numerous capacities, editing stories, coloring frames, checking continuity and writing scripts. It's also worth noting that credits in the issues were often incomplete and sometimes outright wrong (for example, James Van Hise wrote The Dead Remember but it was credited to Joe Gentile, who authored the adaptation of the first film).

Many of the crew members involved were featured in The What NOW Caper?, a pseudo-documentary produced and released in 1989, though there were only a few vague references to Fright Night in the video.

The Fright Night comic book series endured numerous growing pains. Originally the movie adaptation was supposed to be released as a stand-alone graphic novel, but instead it was spread across the first two issues (ironically, Fright Night Part 2 was intended to be adapted for the first two issues but it was instead published as a stand-alone graphic novel). This left a few pages to fill, so an unrelated werewolf short entitled "By the Numbers" was tacked onto the end of the first issue, featuring a segue into the story from Peter Vincent hosting his TV show. In issue #3, an E.C. Comics inspired story was tacked on called "The Revenge of the Vengeful Avenger." Beginning with issue #4, they began devoting the last 8 pages of each issue to Rust, a post-apocalyptic title that NOW Comics was trying to relaunch. Rust was supposed to be included through issue #10, but it abruptly ended in issue #9 and the company began devoting each full book to Fright Night.

Thematically, the stories varied as wildly as the staff, with sea creatures, aliens, werewolves, Greek gods, zombies and various other monsters thrown into the mix. In the monthly Scarlet Letters column, it was clear that readers were most interested in vampires, so a sinister vampire organization called The Legion of the Endless Night became the book's primary villains as the series progressed.

Readers were not given any indication that the series was going to end when Now Comics filed for bankruptcy in 1990.  Issue #22 closes with a blurb stating, "Next Month: Old Enemies, Ancient Monsters!," but issue #23 never went to press, and no closure was given to the newly-started storyline in which Jerry Dandrige had begun amassing a legion of French prostitute vampires.

After the abrupt halt of the series in 1990 and some corporate restructuring, "Fright Night" resurfaced in 1992 and '93 for four 3-D Specials. Three of the issues were reprints of earlier stories, this time drained of color except for the red/blue which added depth to the pages when viewed with the included 3D glasses. The third 3-D issue was the previously unpublished story "Nightmares," which was intended to be issue #23.

In 2003, the company relaunched under the moniker Now Comics 3.0, and it was announced that they'd be releasing a Fright Night graphic novel by founder/writer Tony Caputo and artist Neil Vokes[1] (presumably this would have been the previously-published 2-parter "The Revenge of Evil Ed!") but the book never came to fruition before the company folded again in 2005.

#4 Eight Arms to Hold You

#14 The Resurrection of Dracula, Part 1

#15 The Resurrection of Dracula, Part 2

#20 The Charge of the Dead Brigade

#22 Reign of Terror
Add a photo to this gallery

Regine Dandrige Advertisement
Add a photo to this gallery

Issue 0
Add a photo to this gallery

Retrieved from "https://frightnight.fandom.com/wiki/Fright_Night_Comics?oldid=11316"
Community content is available under CC-BY-SA unless otherwise noted.