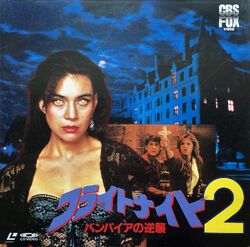 Fright Night Part 2 Home video is a listing of home media releases of the film.

Fright Night Part 2 has been released on VHS, laserdisc and DVD around the world. American releases are adorned with the A-poster art of the face of a vampire; most foreign releases feature the B-Poster art based upon the poster for the original movie. In Japan, Regine was prominently featured - in monster-bat form on the poster and as a vampire vixen on the front of the VHS/Laserdisc release.

In the United States, the film was first released by IVE Entertainment (later to become LIVE/Artisian/Lion's Gate) on October 5, 1989.[1] In addition to the usual promotional posters, video store owners were given the option to order a large cardboard advertising standee which featured the cover art and a few stills from the film on a mock-up of Peter's Fright Night set.[1]

All international distribution was handled by by CBS/FOX.

In addition to the standard cardboard-box edition, the Australian marketing team devised a very unusual release which is housed in a plastic clamshell case shaped like a coffin. Copies of this version are very scarce and seldom turn up on online auction sites.

The film was issued on Laserdisc in the USA by IVE Home Entertainment and by CBS/FOX in Japan. Both editions are hard to come by and they each feature a pan & scan transfer.[2][3] The Japanese edition was issued with an obi strip.[3] 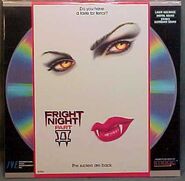 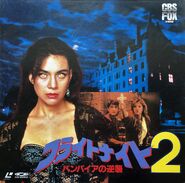 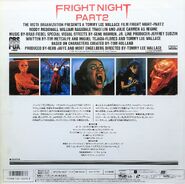 In the USA, the movie was released on DVD by Artisan Entertainment on August 19, 2003. The packaging claims the disc is "presented in the original 1.33:1 format in which the film was shot," so clearly someone didn't get the memo that the film was shot in a wide 2.35:1 ratio. It seems to be the same transfer utilized for the previous VHS and laserdisc releases.

In December 2003, Artisian was bought by Lion's Gate Home Entertainment and the pan-and-scan disc quickly went out of print, lingering on store shelves for a few years before being scalped for around $100 by internet resellers. 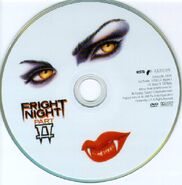 Currently, there's been no announcement of plans for an official blu-ray release.

However, there appear to be a number of blu-rays released by Lion's Gate in circulation but these are actually masterfully designed bootlegs[4] duped from an HD TV transfer. These discs are generally so professionally produced (one version includes reproductions of the lobby cards printed on heavy cardstock) that some have claimed that they were test pressings for an abandoned release or "promo" discs, which has frequently thrust online prices into the triple-digits. Consumers should be wary, as affordable versions can often be found on various sites such as eBay and iOffer.