Convinced that his encounter with vampire Jerry Dandrige was a delusion, Charley Brewster is in for a rude awakening when Regine Dandrige and her posse come to town seeking revenge against him and Peter Vincent. 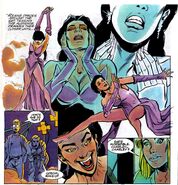 Retrieved from "https://frightnight.fandom.com/wiki/Fright_Night_Part_II_(Comic_Adaptation)?oldid=9589"
Community content is available under CC-BY-SA unless otherwise noted.