Start a Wiki
Jane Brewster is the mother of Charley Brewster. She's a real estate agent working to sell houses in the Las Vegas suburbs. She was at first irritated by her new neighbor, but after meeting the charming Jerry Dandridge ended up flirting with him.  However, she had no serious interest in him, stating that he seemed like a player and she'd had enough man troubles.

Later she finds out Jerry was actually a vampire when he tried to kill her, Charley, and Charley's girlfriend.  While driving down the highway to try and escape him, Charley pushes her into running Jerry over.  Their van is hit by another car from behind, and she's injured in the crash.  She stays conscious long enough to stake Jerry with one of her real estate signs, saving her son, though she unfortunately missed the heart.  After she passes out, Charley and Amy take her to the hospital. 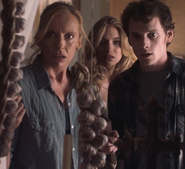 Jane, Amy, and Charley (2011)
Add a photo to this gallery
Retrieved from "https://frightnight.fandom.com/wiki/Jane_Brewster?oldid=11373"
Community content is available under CC-BY-SA unless otherwise noted.