Start a Wiki
Judith "Judy" Brewster is the mother of Charley Brewster. Judy is unaware that her son Charley battles vampires with washed up horror actor Peter Vincent.

Judith resides in Rancho Corvalis, Iowa. It is here where she raises her only son Charlie.

Judy was completely unaware of Jerry Dandridge being a vampire and responsible for recent murders. She even invited him into her residence.

Sending Charley off to collegeEdit

It is unknown how supportive Judy was in Charley's transition into college.

Charlie was Judy's first and only son. She loves her son dearly and teaches him proper manners when around other people. She is very protective of Charlie and worries about him a lot during the film. Judy raised Charlie on her own and worked very hard to make a better life for her and her son. Charlie too loves his mother and respects her. However he does get upset at her when she doesn't understand him when he tells her that Jerry is a vampire.

Judy and Amy have a mother/daughter relationship. She wasn't bothered with Amy dating her son. She also believed that one day Amy and Charlie might marry each other someday even though Charlie claimed they were only in high school, but she said it never hurts to plan ahead.

JudyBrewster2.jpg
Judy
Add a photo to this gallery 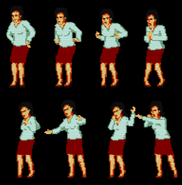 Retrieved from "https://frightnight.fandom.com/wiki/Judy_Brewster?oldid=10847"
Community content is available under CC-BY-SA unless otherwise noted.