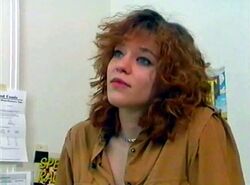 Katherine "Kat" Llewellyn is an American writer and artist who worked on every issue of the Fright Night comic book series except for the 3-D issues in various capacities as a writer, editor, colorist, etc. In some issues, she was credited as "K. Llewellyn" and in others as "Kate Llewellyn."

Katherine Llewellyn is a writer and animation director working in entertainment and advertising in New York City. A graduate of The School of Art Institute in Chicago, she began her career as a colorist and graphic designer. As Editor-in-Chief of Now Comics, she wrote and art-directed such titles as Twilight Zone and Green Hornet. She edited the adaptation of Terry Gilliam's The Adventures of Baron Munchausen, colored the H.P. Lovecraft series for Adventure Comics, and developed the original concept for Alias, later acquired by MGM/Universal.

As a Visiting Artist at The Beckman Institute for Advanced Science and Technology of Illinois, she delved into CGI, assisting research with image generation of electron microscopy and MRI data. Her visualization of the molecule was featured on the cover of the magazine Science.

Moving to New York City, she became animation director at post-production house CLICK3X, supervising the 3D department and the creation of visual effects for broadcast design and commercials.

She currently directs animation for film, television and interactive video games, and teaches animation concepts and digital arts tools as Adjunct Professor at The School of Visual Arts. Her animation for The American Museum of Natural History's Return to the Pole helped the exhibit win a 2010 CINE Golden Eagle Award, and her mobile application for the Punky Drunk Project won the App Award at the 2014 New Media Film Festival.

Retrieved from "https://frightnight.fandom.com/wiki/Katherine_Llewellyn?oldid=8035"
Community content is available under CC-BY-SA unless otherwise noted.