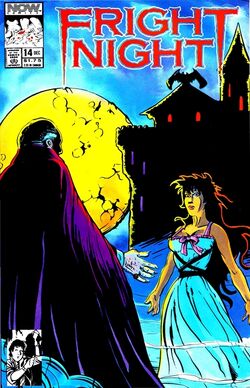 The Resurrection of Dracula, Part 1 is a comic book published in December 1989 by NOW Comics.

Peter’s enrolled into “The Institute for the Performing Arts and Expansion of the Subconscious,” where he’s been hypnotized into thinking he’s Van Helsing. Charley and Natalia attempt to bring him back to reality by putting on a Dracula performance, but Evil Ed convolutes matters.

Retrieved from "https://frightnight.fandom.com/wiki/The_Resurrection_of_Dracula,_Part_1?oldid=7915"
Community content is available under CC-BY-SA unless otherwise noted.