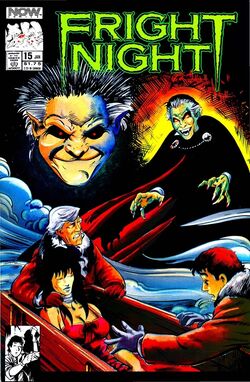 The Resurrection of Dracula, Part 2 is a comic book published in January 1990 by NOW Comics.

The experimental play has been a resounding failure, Natalia’s life in jeopardy, her Aunt shows up to unmask the doctor as a fraud, and Peter ‘Van Helsing’ decides to save the day.

Retrieved from "https://frightnight.fandom.com/wiki/The_Resurrection_of_Dracula,_Part_2?oldid=7976"
Community content is available under CC-BY-SA unless otherwise noted.