The new DJ at "The Club" is actually Evil Ed, who seems hellbent on screwing with Charley Brewster's head. Meanwhile Charley learns that his new girlfriend Natalia's father was killed by a vampire. 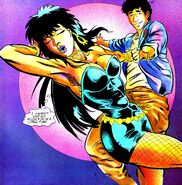 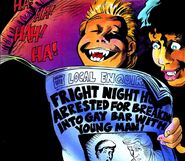 Retrieved from "https://frightnight.fandom.com/wiki/The_Revenge_of_Evil_Ed!?oldid=8393"
Community content is available under CC-BY-SA unless otherwise noted.