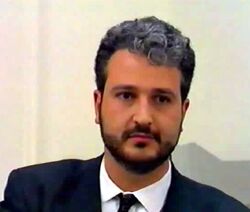 Tony C. Caputo (born December 23, 1957) is an American author, visual artist, entrepreneur, and former publisher, who was the mastermind behind NOW Comics.[1]

In 1985, Caputo founded NOW Comics[1] and NOW Entertainment Corporation,[2] a multimedia company that published comic books, children's periodicals, trade paperback books, and home videos of such characters as Speed Racer, the Terminator, The Real Ghostbusters, Mr. T & the T-Force, and The Green Hornet.[3] He also wrote scripts and provided illustrations for some of characters' comics. Caputo ran NOW until 1994,[4] briefly reviving the company from 2003–2005. While working there, he authored the graphic novel Vespers,[2] and wrote an article on the American comic book market,[5] which included detailed market share reports for the first time.[6]

In 2004, Caputo created the Draw for Battle card game.[7] Caputo left the entertainment business in 1994,[4] and moved into information technology, first with Ahrens Interactive in 1995, and then with HyperLOCK in 1996.[8]

Since 2010, he has worked for IBM on Homeland Security projects for the City of Chicago and New York City.[9]

Caputo's nonfiction books include How To Self-Publish Your Own Comic Book (Watson-Guptill), Visual Storytelling: The Art and the Technique,[10] Build Your Own Server (McGraw-Hill) and Digital Video Surveillance and Security (Elsevier/Reed). His articles have been published by Tech Republic, ICv2.com [11] and the Chicago Tribune.

Retrieved from "https://frightnight.fandom.com/wiki/Tony_Caputo?oldid=8003"
Community content is available under CC-BY-SA unless otherwise noted.