Fright Night Wiki
Register
Don't have an account?
Sign In
Advertisement
in: Fright Night 1985 FX, Behind the Scenes

The Jerry Dandrige Bat is a puppet used in the 1985 film Fright Night. Two different bats were created by FX man Randy Cook; one was a marionette which functioned for blue-screen flying sequences, the other was a hand puppet.

Richard Edlund's FX team, who had just finished work on Ghostbusters, were hired to create state-of-the-art special effects on a low budget. The bat sequence was extensively storyboarded, and writer/director Tom Holland worked closely with the FX team to ensure the creature turned out as well as he'd envisoned it.  "There's never been a successful bat in any vampire movie I've seen," commented Holland in 1985.[1] "For Fright Night I wanted there to be a connection between the vampire as a man and as a bat." The FX crew achieved this by maintaining the mass of actor Chris Sarandon. "Instead of shrinking down to Chihuahua-size to take off," commented FX man Randy Cook, "he's still shifting his shape, while still retaining most of his mass, so we've got something with about an eight-foot wingspread. [2] Originally they had planned to model the puppet after the actor, but Sarandon signed onto the film so late that this wasn't feasible. "We had to work sort of back-asswards on that," said Cook. "I've been making rubber appliances to put some of my puppet's features onto Sarandon."[2]

Holland conveys his ideas for the creature 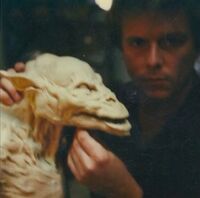 For the transformation of Jerry Dandrige into a bat, Chris Sarandon's stunt double was suspended on wires in front of a blue screen. Because the set was not large enough to accomodate the camera move, a 25 foot long miniature was constructed to simulate 150 feet of real wall space in Jerry's home, and it was shot as a background plate. The final transformation was achieved by animator Sean Newton, who rotoscoped the stuntman's shadow into a flapping bat.[1] 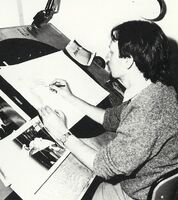 For the flying sequences, the marionette was placed in front of a blue-screen and puppeteered from above. Because of the size of the puppet, the speed of the creature's flight was problematic. "What we did was go through the bat's motions very slowly, and then speeded it up," said Randy Cook. "You can't get the necessary speed in real time without shaking it and making it go crazy."[2] 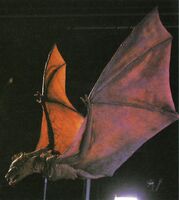 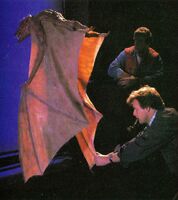 The filming of the sequence in which the bat attacks Roddy McDowall posed greater challenges. FX man Randy Cook designed the main articulation of the creature's neck and face for himself too perform, but "my poor bloody hand just crammed into the mechanism that I built a little too tight," he commented.[1] Unfortunately, it wasn't just the fit that was a problem. "I had the same problem that every other puppeteer of this sort has. You put your hand up inside of it and by the time you get a take that's good enough to use, you have no strength left." "Poor Roddy McDowall had the biggest challenge of all," Cook continued.[1] "After maneuvering the bat for so long I was exhausted -- and so all he was fighting with was this incredibly weak thing, trying manfully to look as if he were in peril." With seven people puppeteering the creature, it became difficult to shoot the scene without crew members becoming visible on film, particularly Cook, who had to keep his head burrowed in McDowall's crotch to avoid being seen.

Further complications ensued when the bat tries to bite Roddy McDowall's character and he forces a bone into its mouth. Puppeteering blindly, Cook was unable to hit his mark, so it was suggested that they position the bone in the bat's mouth, have Cook retract the creature and then they edited the film in reverse to appear that it was biting.[3] Then while grappling with the exhausted puppeteer's hand, McDowall jerked the bone too hard, which cracked the bat's skull and its eyeballs sunk into its head.[3] The bat was quickly patched, but required repairs forced them to wait two days to shoot more close-ups. 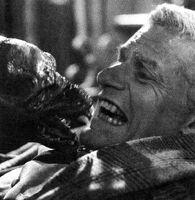 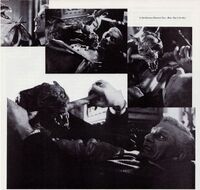 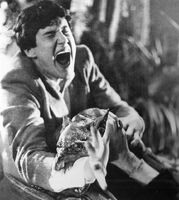 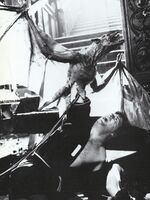 In 2009, the bat marionette and a werewolf mask worn by Stephen Geoffreys were auctioned as a set on icollector and ultimately sold for $15,000.00.[4] Latex rubber has a tendency to deteriorate over time and when exposed to heat, so it's little surprise that the wings were visibly in disrepair on the auction photos. It's unknown where the hand puppet bat ultimately ended up.

The winner of the auction was not disclosed on the site but it soon became apparent when both items were viewed in various video interviews encased in plexiglass in director Tom Holland's home. Holland had the bat restored and posed with the creature for photographer Lynne Peters in April 2015. His love for the puppet was clear from the start. When the creature was brought on-set to attack Peter Vincent, Holland emphatically gushed to Fangoria Magazine writer Abbie Bernstein, "On a scale of one to ten, isn't that a terrific bat?"[3] 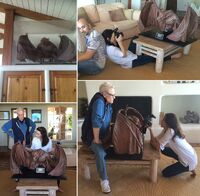 The FX team for Fright Night Part 2 was tasked with topping the effects from the original film. For the bat alterego of Regine Dandrige they created a stop-motion miniature, a full-sized puppet and they also had an actress buried under prosthetic monster-bat makeup.

In issue #9 of the Fright Night comic book series, Evil Ed transforms into a bat which bears an uncanny similarity to the design of the bat from the film (though ironically, the character design for Evil Ed bears only a passing resemblance to actor Stephen Geoffreys), but he stands on his feet like a human.