You're So Cool, Brewster! The Story of Fright Night is a 2016 feature-length documentary about Fright Night. The documentary was produced by writer/director Tom Holland with participation from cast and crew members, and is hosted by Peter Vincent, portrayed by actor Simon Bamford (Hellraiser, Nightbreed) under prosthetic makeup created to make him resemble Roddy McDowall.

From Dead Mouse Productions and the Producer of Leviathan: The Story of Hellraiser & Hellbound: Hellraiser II, comes the all-new Fright Night documentary. Fully supported and produced by original Fright Night writer and director Tom Holland, this documentary is the ultimate insight into the making of this cult classic movie as well as a tribute to the late, great Roddy McDowall. The Story of Fright Night will feature detailed interviews with those who helped shape and create this much loved movie. Guided by Tom Holland, the makers of this new documentary will raise the stakes and unearth the behind the scenes stories including footage and images from Tom’s personal archives.

Leviathan proved that an independent documentary supported solely by the fans and a dedicated team of filmmakers can result in a fully detailed retrospective documentary. Leviathan is a 3-disc, 9 hour treat for Hellraiser fans, the intention is to give Fright Night the same respect and treatment.

Production on Leviathan: The Story of Hellraiser and Hellbound began in October 2013 by Cult Screenings UK Ltd. By June 2014, the filmmakers realized the funds weren't available to properly tell the complete story since the production team were unable to visit and release the film in the USA, so they started a Kickstarter page and raised an additional £16,395 from fans.[1] After overshooting the estimated release date, the highly anticipated 3-disc limited edition of Leviathan went up for pre-order on the official site on April 13, 2015.[2] A few days prior, it was announced that the production team were joining forces with writer/director Tom Holland to produce a documentary on the original Fright Night.

A Facebook page was started for the Fright Night Doc on April 7, 2015, where they declared the documentary would double as "a tribute to the late, great Roddy McDowall." Within the day they had 300 likes, which had increased to almost a thousand by the end of the day, and they attained 1600 followers by April 10. Within days of the creation of the Facebook page, word of the documentary began to trickle out to online news outlets,[3] [4] [5][6][7][8] [9][10][11] Tom Holland first mentioned it in an interview with The Blood Shed,[12] and the British Film Institute also tweeted a blurb about it.[13]

On April 12th, they put out a cryptic request for a UK-based Roddy McDowall lookalike and elaborated the next day when it was announced that Simon Bamford had agreed to take the part, hosting the documentary as Peter Vincent. Bamford has few film credits, but he's known amongst Clive Barker fans for his appearances in the first two Hellraiser films as Cenobyte Butterball as well as for his sensitive portrayal of humanistic Ohnaka in Nightbreed. In the same message it was reported that makeup designer Stuart Conran (whose credits include Hellraiser, Hellbound, Shaun of the Dead, The Hours and many other films) was creating prosthetic makeup to make Bamford more closely resemble McDowall. By April 15th, word came through that the Peter Vincent costume had been purchased and a "Your Host, Peter Vincent" teaser trailer was scheduled to be released in June 2015.

Currently a handful of actors and crew members from the original pair of films have committed to appear, with more participants promised to follow. An interview with Jonathan Stark was filmed in London on April 28, 2015, with production begun earlier than the initial projected summer 2015 start date.

In order to boost raise funds for production, the crew will begin a Kickstarter campaign on June 3, 2015, which will run for 30 days. As incentive, they will be offering T-shirts, posters (signed by artist Graham Humphreys and Tom Holland), a copy of the finished DVD and production credits. Presumably this will coincide with the teaser trailer showing Simon Bamford in full Peter Vincent attire.

On May 2, they unveiled an image of a T-shirt featuring Peter Vincent in front of a stained-glassed window with a bat over his head, and smaller images below it of a vamped-out Amy and Evil Ed getting cross. The image was rendered by Doug Saquic, who previously provided art featured in documentaries for Friday the 13th, Halloween, Hellraiser and A Nightmare on Elm Street, as well as the image for the limited edition Leviathan T-Shirt. 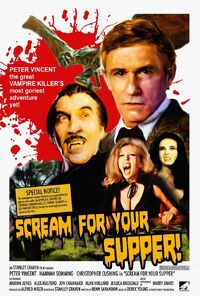 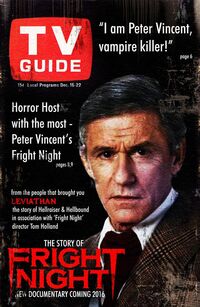 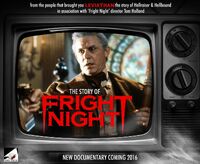 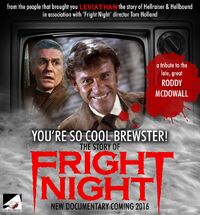 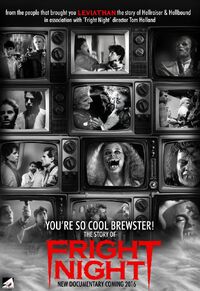 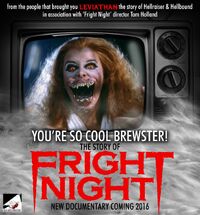 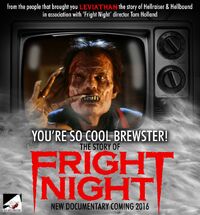 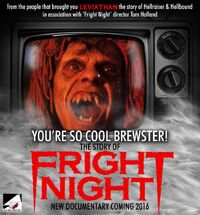 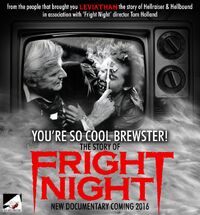 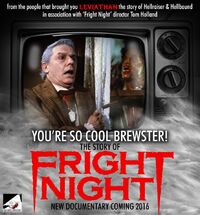 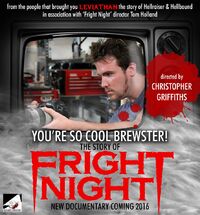 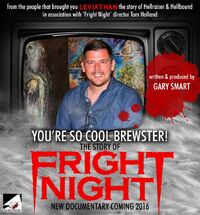 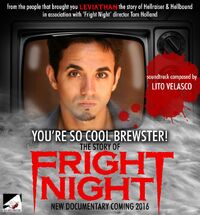 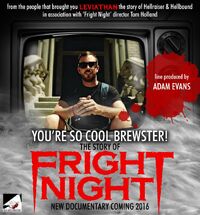 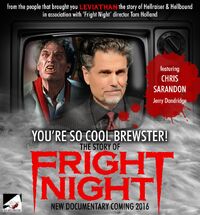 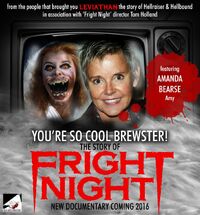 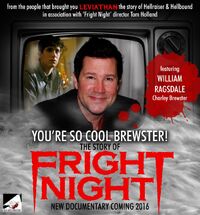 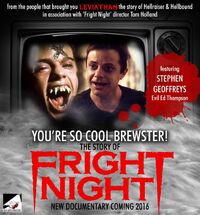 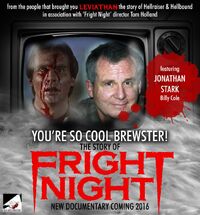 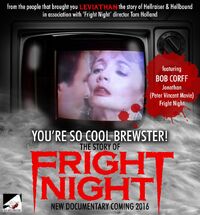 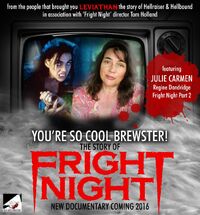 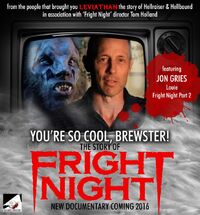 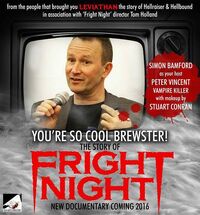 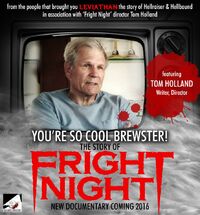 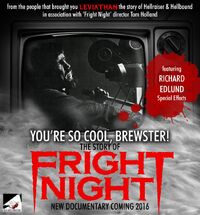 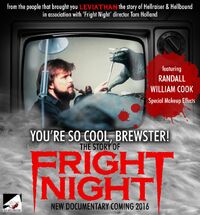 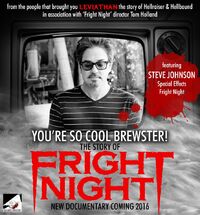 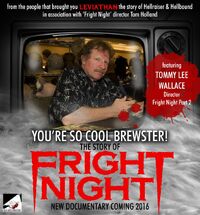 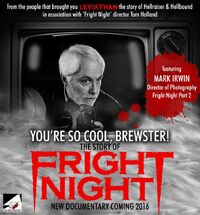 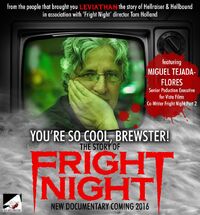 Retrieved from "https://frightnight.fandom.com/wiki/You%27re_So_Cool_Brewster!_The_Story_of_Fright_Night?oldid=10864"
Community content is available under CC-BY-SA unless otherwise noted.